The 2011–12 Notre Dame Forum begins with an interactive address led by Jeb Bush, Florida’s former governor and founder of the Foundation for Excellence in Education. Gov. Bush will address the dramatically changing landscape of K–12 education, as well as how the Notre Dame community can play a vital role in providing vision and leadership in crafting a vibrant education sector for all children.

Rev. John I. Jenkins, C.S.C., president of the University of Notre Dame, will introduce Bush. 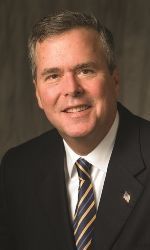 Jeb Bush is the 43rd governor of the state of Florida, the only Republican in the state’s history to be reelected. Throughout his two terms, Gov. Bush cut $20 billion in taxes, vetoed more than $2.3 billion in earmarks, and reduced the state government workforce by more than 13,000.

Bush championed major reform of government programs. In education, Florida raised academic standards, required accountability in public schools, and created the most ambitious school choice program in the nation. After gaining permission from the federal government, Florida launched Medicaid reform to improve quality and control the rising cost of the $16 billion state-federal partnership that pays for the health care of 2.2 million poor, disabled, and elderly citizens.

Currently, Bush is the president of the consulting firm Jeb Bush and Associates and a senior advisor to Barclays Capital. He is on the boards of several major corporations and is the chairman of the Foundation for Excellence in Education and the Foundation of Florida’s Future. He serves on the National Civic Leaders Advisory Board of America’s Promise Alliance, the George H.W. Bush Presidential Library, the George W. Bush Institute Board, and the Bloomberg Family Foundation Board.