Does the law impede innovation in education?

Governor Chris Christie, the 55th and current Governor of New Jersey, will serve as the keynote speaker at this symposium hosted by the Notre Dame Law Review. The event will consider a wide range of legal issues related to education, including the education gap, school choice, charter schools, labor issues, and the effect of the current state and local fiscal crisis on public education. Two panels of legal scholars will present and discuss issues surrounding educational innovation and the law.

Ticketing
The symposium is free and open to the public, but tickets are required for admission to the keynote address. The Notre Dame Law Review will issue tickets, one per person, on the day of the event beginning at 1:00 p.m. EST in the Eck Commons (Eck Commons is the bridge connecting Biolchini Hall of Law and Eck Hall of Law on the second floor). Any empty seats will be filled beginning at 2:20 p.m. Overflow viewing space will be available in Eck Hall of Law, room 1130 and Biolchini Hall, rooms 1315 and 1310.

The keynote will also be viewable via an interactive live video stream on this website. 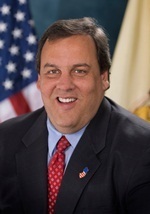 Born in Newark and raised in Livingston, Chris Christie is a lifetime New Jersey resident, absent only the years he attended college.

After graduating from the University of Delaware in 1984, Christie enrolled at Seton Hall University School of Law, graduating in 1987. He joined a Cranford law firm where he was quickly named a partner. He was elected a Freeholder in Morris County, and served as director of the board in 1997.

Christie was named U.S. Attorney for the District of New Jersey in 2002. As the chief federal law enforcement officer in New Jersey, he garnered praise from leaders in both parties and drew national attention for his efforts in battling political corruption, corporate crime, human trafficking, gangs, terrorism, and polluters. Christie led a widely acclaimed charge against public corruption. Regardless of party affiliation or political influence, when laws were broken, Christie took action. His office racked up an astonishing record—winning convictions or guilty pleas from more than 130 public officials, both Republican and Democrat—without losing a single case.

Both panels and the keynote address will be held in the Patrick F. McCartan Courtroom in the Eck Hall of Law.
8:45 – 10:45: Panel One – Moderated by Professor Patricia O’Hara (University of Notre Dame)